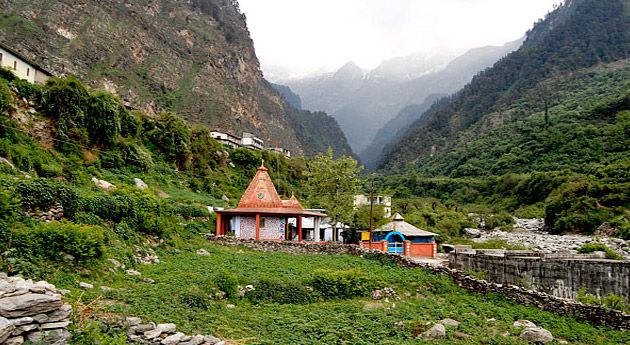 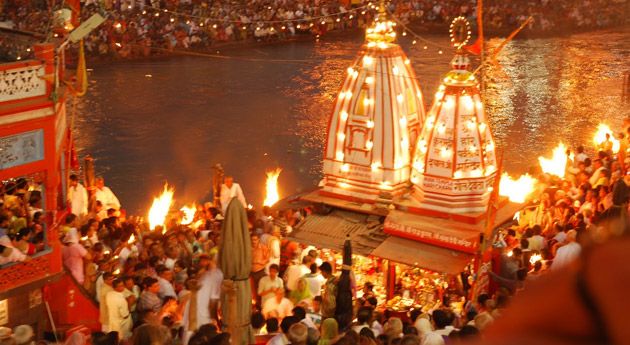 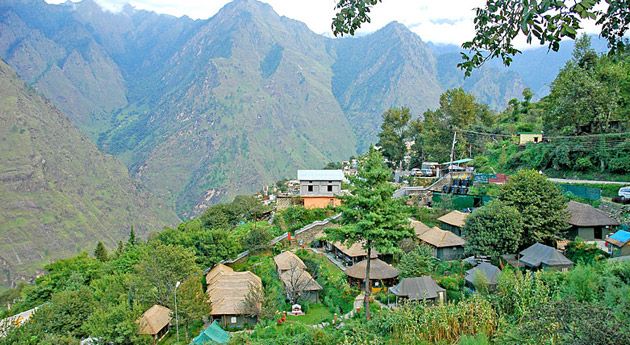 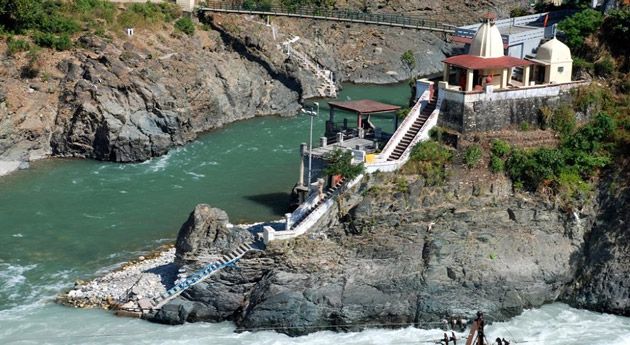 When we think of spirituality, the first thought to cross our mind is of Char Dham Yatra of Uttarakhand. Char Dham yatra journey start from Gangotri, the sojourns leads to Yamunotri, Kedarnath and lastly Badrinath.

Book 11 nights / 12 days Chardham Yatra tour Package by road takes you to the four revered sites of India and takes care of your every need. Along with that, the itinerary also covers other famous tourist attractions in Uttarakhand. Chota Chardham Yatra takes place in the surreal realms of Uttarakhand covering four main pilgrimage sites.

Arrival Delhi Airport / Railway Station / Hotel, Meet for representative and get assisted further Delhi to Haridwar by road. Reach Haridwar and transfer to your Hotel. Visit Har-ki-Pauri for Ganga Aarti in evening. Back to your hotel, Night halt. (Dinner)

Haridwar, lying at the feet of Shiva's hills, i.e., Shivaliks, in the Haridwar district of Uttaranchal Pradesh, is a doorway. Suryavanshi prince Bhagirath performed penance here to salvage the souls of his ancestors who had perished due to the curse of sage Kapila. The penance was answered and the river Ganga trickled forth forms Lord Shiva's locks and its bountiful water revived the sixty thousand sons of King Sagara. In the traditional of Bhagirath, devout Hindus stand in the sacred waters here, praying for salvation of their departed elder. It is doorway to the sources of the Ganga and the Yamuna, 3000 to 4500 meters up into the snowy ranges of the central Himalayas. The 'Aarti' worship of the Ganga after sunset and the floating 'dia' (lamp) is a moving ritual.

Today, drive from haridwar to Barkot (Kharsali) via Dehradun and Mussoorie. En-route visit the very popular Kempty Fall and later drive straight to your Hotel for night halt. (Breakfast, Dinner)

Start from here to Yamunotri (5km). Either by walk or by horse or by Doli at own cost. Arrival in Yamunotri. On your way to the Yamunotri temple, Visit Surya Kund. One can cook rice by packing it in a cloth and dipping it in the hot water of the hot kund. Pilgrims take this cooked rice home as "Prasad". Here near the temple "Pooja" can be offered to Divya Shila, after taking bath in Jamunabai Kund's warm water and having "Darshan" of pious "Yamunaji" returning to Jankichatti. Later drive back to Barkot. Overnight stay at Hotel. (Breakfast, Dinner)

Yamunotri Temple: Maharani Gularia of Jaipur built the temple in the 19th Century. It was destroyed twice in the present century and rebuilt again.

Surya Kund: There are a Number of thermal springs in the vicinity of the temple, which flows into numerous pools. The most important of these is Surya Kund.

Palki or doli can be arranged on direct payment basis at hotel on 2 days prior request.

In the morning, drive to Uttarkashi. Check- in at the Hotel, later in the evening visit Vishwanath Temple. Night Halt. (Breakfast,Dinner)

Uttarkashi: Situated at the bank of river Bhagirathi. The temple of Lord Vishwanath is located here where a massive iron trident is erected.

Gangotri Temple: The temple, constructed by the Gorkha General Amar Singh Thapa in the 18th Century, is situated on the right bank of Bhagirathi.

Kedar Ganga Sangam: Around 100 Yards from the Ganga Temple flows the river Kedar Ganga. Starting from the Kedar Valle, this river meets the Bhagirathi on its left bank.

Drive straight to Guptkashi. En-route you can see the beautiful river Mandakini at Tilwara. The Mandakini River comes from Kedarnath, drive alongside the river to reach Guptakashi. On arrival check in at the Hotel. Later proceed for Kedarnath. After pre-registration, return back to hotel. Overnight stay at the Hotel. (Breakfast, Dinner)

The name Gupt Kashi means "Hidden Benares. Mythology describes how when the Pandava brothers were searching for a glimpse of Shiva, Shivji first concealed himself at Gupt Kashi, but later fled from them further up the valley to Kedarnath, where the Pandavas finally got their wish fulfilled. There are more tangible connections as well-the Kedarnath pandas (hereditary pilgrimage priests) live in Gupt Kashi during the winter months, and after the Kedarnath temple closes for the winter, the image of Kedarnath passes through Gupt Kashi on its way to Ukhimath (across the valley), where it stays for the winter.

Morning drive Guptkasi to Sonparyag by road, Take a local jeep from Sonparyag to Gaurikund by road. From Gaurikund start your trek to Kedarnath (3584 mts) on foot or on by pony / Doli. Tour members should carry personal medicines, heavy woolen, toiletries and clothes for an overnight halt at Kedarnath. Check in Lodge. Later visit Kedarnath Temple. Night halt. (Breakfast, Dinner)

Kedarnath: The Kedarnath shrine, one of the 12 jyotirlingas of Lord Shiva, is a scenic spot situated, against the backdrop of the majestic Kedarnath range. Kedar is another name of Lord Shiva, the protector and the destroyer. According to legend, the Pandavas after having won over the Kaurava in the Kurukshetra war, felt guilty of having killed their own brothers and sought the blessings of Lord Shiva for redemption. He eluded them repeatedly and while fleeing took refuge at Kedarnath in the form of a bull. On being followed he dived into the ground, leaving his hump on the surface. The remaining portions of Lord Shiva appeared at four other places and are worshipped there as his manifestations. The arms appeared at Tungnath, the face at Rudranath, the belly at Madhmaheshwar and his locks (hair) with head at Kalpeshwar. Kedarnath and the four above-mentioned shrines are treated as Panch Kedar.

Rudraprayag: Rudraprayag is one of the Panch Prayag (five confluences) of Alaknanda River, the point of confluence of rivers Alaknanda and Mandakini. Kedarnath, a Hindu holy town is located 86 km from Rudraprayag. The famous man eating Leopard of Rudraprayag hunted and written about by Jim Corbett (hunter) dwelled here.

Badrinath one of the 'Four Dhams' is one of the most celebrated pilgrimage spots of the country and is situated at an elevation of 3,133 meters, guarded on either side by the two mountain ranges known as Nar & Narayan with the towering Neelkanth Peak providing a splendid backdrop. This revered spot was once carpeted with wild berries. Thus the place got the name "Badri van", meaning "forest of berries".

Tapt Kund: Natural thermal springs on the bank of the river Alaknanda, where it is customary to bathe before entering the Badrinath temple.

Narad Kund: A recess in the river, near Tapt Kund, forming a pool from where the Badrinath idol was recovered.

Brahama Kapal: A flat platform on the bank of river Alaknanda. Hindus performing rites for their deceased ancestors.

On 10 Day Badrinath temple visit, pilgrims after having a bath in the Taptkund have the Darshan of Badrivishal. Brahamakapal is significant for Pinddan Shraddh of ancestors (Pitrus). There are other interesting sightseeing spot like Mana Village. Just within the three km of Badrinathjee, if time permitting you would be visiting these as well. Later drive back to Rudraprayag via Joshimath. Check in at the Hotel. Overnight stay. (Breakfast, Dinner)

Drive to Haridwar, en-route visit of Rishikesh the 'place of sages' is a celebrated spiritual town on the bank of Ganga and is surrounded by Shivalik range of the Himalayas on three sides. It is said that when Raibhya Rishi did hard penances, God appeared by the name of 'Hrishikesh' and this area hence firth came to be known as Rishikesh. Check in Hotel.

Your Chardham Yatra pacakge by road ends today and Drive back to Delhi. On Arrival in Delhi, transfer to Railway Station / Airport. Tour Terminate. (Breakfast)