Mata Vaishno Devi Yatra is among the holiest pilgrimages in India. The holy cave shrine located in the Trikuta hills at an altitude of 5200 feet in the state of Jammu and Kashmir is dedicated to Vaishno Devi Yatra. Thousands of devotees from across the globe have deep faith in the presence of divinity and perform the holy trek. From the base of the trek, pilgrims undertake the arduous journey of 14 kilometers to the holy cave. We help you with multiple options of Vaishno Devi Tour Packages. 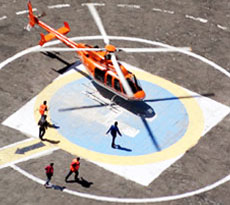 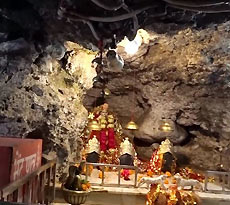 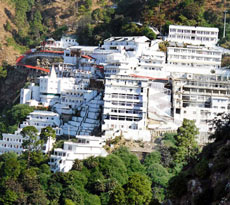 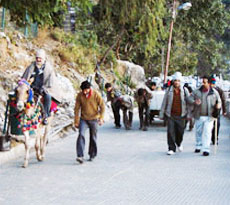 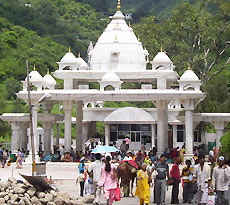 According to legends Mata Vaishno devi took refuge in the Trikuta hill and meditated here for 9 months. The main temple has the idol of three Hindu goddesses in the form of Pindies, representing Goddesses Kali, Lakshmi and Saraswati. Plan a Vaishno Devi tour to be blessed by the divine Mother Goddess. You can visit throughout the year as the temple is never closed.

Apart from the main cave temple, there are other attractions like Banganga, Ardh Kunwari, Main Bhawan and Bhaironath temple. Furthermore, Maa Vaishno Devi trip is considered incomplete without visiting the Bhaironath temple.

Choose from our extensive range of Mata Vaishno Devi tour packages. We help you in every way to have a spiritual journey.

Ans: Yes, after a long wait of 5 months Shri Mata Vaishno Devi temple is now open for pilgrims. The shrine board has allowed the Yatra for the devotees, only 2,000 pilgrims per day will be allowed per day for the holy darshan.

Ques: What sorts of rules and guidelines to be followed during Yatra?

Ans: The Jammu and Kashmir government has introduced strict guidelines for the pilgrims on the holy darshan which are as follow:

Ques: What is the price helicopter from Katra to Vaishno Devi Temple?

Ans: The one-way price of the Vaishno devi helicopter tour from Katra to Vaishno Devi Temple is INR 1045 while the two-way ticket is of INR 2090.

Ques: How to reach Vaishno Devi Bhawan from Katra?

Ans: There are several ways to reach Vaishno Devi Bhawan from Katra. Here is the list:

Ques: Is there a ropeway in Vaishno Devi?

Ans: Yes, there is a ropeway in Vaishno Devi which takes you from Vaishno Devi Mandir to Bhairon Baba Mandir.

Ques: What is the best route from Katra to Maa Vaishno Devi Bhawan?

Ans: The best route from Katra to Maa Vaishno Devi Bhawan is the latest route which takes you from the Tarakote Marg. There are no Pony, Pithoo, and Palki on this route. This route is especially for the pilgrims who wish to complete the Yatra on foot. There are three routes to reach Vaishno Devi Temple from Katra which includes:

Ques: How far is Bhawan from Sanjichhat?

Ans: Bhawan is at a distance of 2.5 km from Sanjichhat

Ques: What is the price Ponies & Pithoos, Palki from Katra to Vaishno Devi Temple?

Ans: The prices of Vaishno Devi yatra by helicopter, Ponies, Pithoos, and Palki vary. Here are the prices:

Ques: What is the ropeway cost from Vaishno Devi to Bhairon Baba?

Ans: The cost of the ropeway ride from Vaishno Devi to Bhairon Baba is INR 100 per person one way.

Ans: Vaishno Devi Temple is one of the most revered Hindu pilgrimage sites in India. This cave temple is dedicated to Goddess Vaishno Devi who was believed to be a manifestation of Goddess Parvati or Shakti. Goddess Vaishno dwells here in the form of Pindi's (rock formation).

Ques: What is the best time to visit Vaishno Devi?

Ans: Devotees visit here throughout the year while the best time to visit Vaishno Devi is between March and October.