Every year, thousands of pilgrims visit Amarnath, one of the most revered shrine in south Kashmir. However, not many know that a visit to this shrine offers tourists an opportunity to explore Kashmir valley, also known as the “Heaven on Earth.” From the picturesque lakes, snowcapped peaks, and roaring rivers to numerous trails – the opportunities for seeking adventure and witnessing nature’s beauty are unlimited. Take a look at some of the top places to visit in Jammu & Kashmir state before and after Amarnath Yatra. 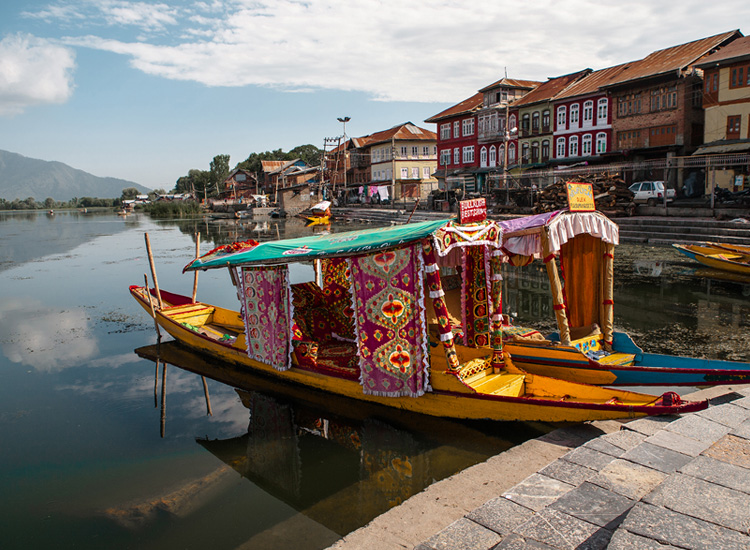 With green mountains that touch the skies to the deep valleys that disappear below, a visit to Srinagar leaves one intoxicated with wonder. From the Mughal Gardens, comprising of Chashme Shahi to the Hazratbal Mosque which preserves the ‘Moi-e-Muqaddas’, or “the sacred hair” of Prophet Muhammad, Srinagar has a lot to offer. However, the crown of Srinagar is undoubtedly its Dal Lake, with its stationary houseboats that redefine the meaning of romance.

What to visit in Srinagar

Catch a ride on one of the houseboats, also called “shikaras”, on the serene Dal Lake. Spread over 15 km, the lake buzzes with activity in the mornings – with the floating flower and vegetable markets. Visit the Shankaracharya Temple, which is also believed to be the most ancient of its kind. Constructed around 200 BC by Jaluka, it sits atop Shankaracharya Hill.

Head to the Mughal Gardens to witness nature in its most colorful avatar. One of the defining features of the garden is its square fountain pool, the source of which is the water from the Royal Springs. 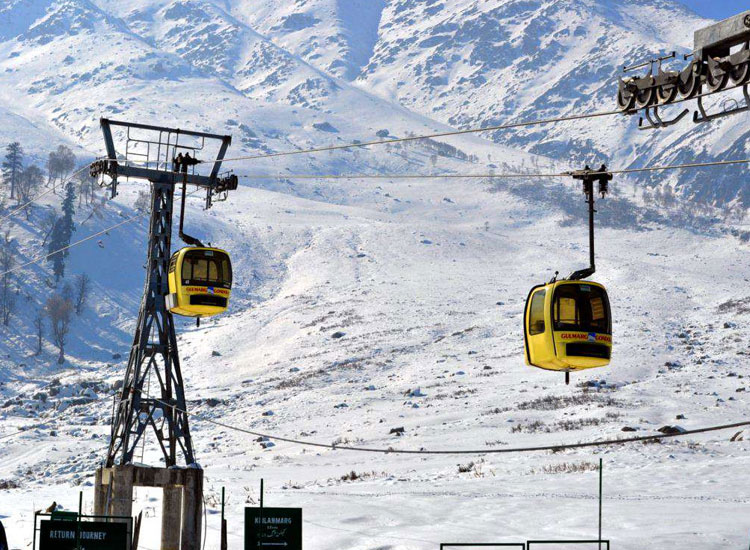 The heavenly beauty synonymous with Kashmir, finds its complete expression in Gulmarg. Also known as the “Meadow of Flowers,” it is famous for hosting the world’s highest golf course, a triangular frozen lake and the Gondola ride. In addition, adventurists find their dose of adrenaline by skiing the enormous slopes of Gulmarg. The beauty of this place transforms with every season, which brings out the best of it every time.

What to visit in Gulmarg

Opt for a Gondola Ride. The beauty of Gulmarg, which meets your eyes while being suspended at a height of 10,000ft, is an unforgettable experience. Try your hand at golf at the Gulmarg Golf Course, an 18-hole golf course spread over approximately 7 km – the largest in the country.

To become the witness of some exotic flora and fauna, head to the Gulmarg Biosphere Reserve. Placed at an altitude of 2400m above sea level, this reserve is home to an exciting variety of wildlife, such as Musk Deer, Red Fox, Brown and Black Bear, besides many others. 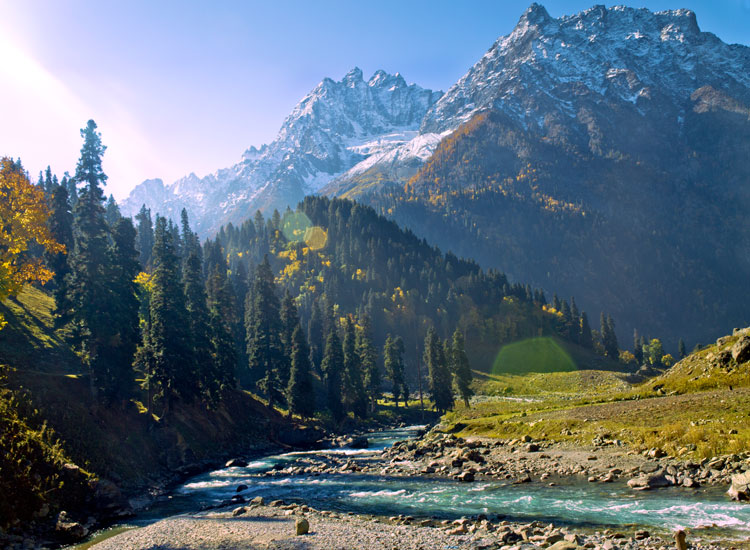 Seated at a height of 7,200ft, Pahalgam is also known as the “Valley of Shepherds.” This lush hill town is surrounded by dense pine forests, vast Rolling Meadows and the enormous Himalayan Mountains. Besides serving as a base camp for tourists during the Amarnath Yatra, the Pahalgam-Chandanwari-Amarnath route also caters to tourists eager to reach the mountain cave of Lord Shiva. This place also offers a range of adventurous opportunities, one of which is water rafting down the Lidder River.

What to visit in Pahalgam

Visit the Betaab Valley, the beauty of which was made immortal in the movie, Betaab. Located at the mouth of River Sheshnag, the valley is encircled by snowy mountains, dense pine and deodar forests. Revisit history at the Mamaleshwar Temple.

One of the most ancient temples in Pahalgam, the Mamaleshwar Temple dates back to the 12th century. Dedicated to Lord Shiva, this temple was built by King Jayasimha. A pedestal, Shiva Lingam, along with a pure water basin covered by a basin, can be found on its premises. 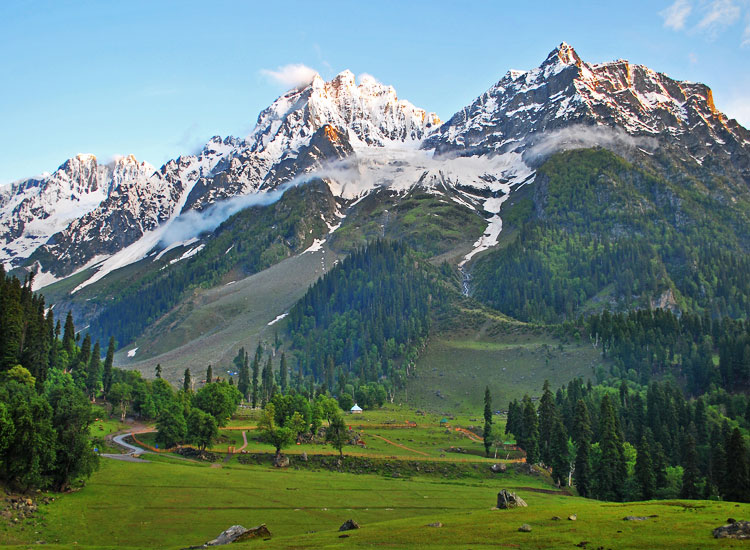 The road to Sonamarg lies through the Sindh Valley, which paints a perfect picture of the countryside in Kashmir. With the snowy mountains overseeing it and the wild countryside encircling it, this region presents a contrasting picture of nature. The Sindh River which flows through the valley, is home to a large number of trout and mahaseer (breed of fishes). This place is also the starting point for a major trekking route. Besides, it also serves as a base camp for pilgrims who undertake the journey to Amarnath cave from Baltal route.

What to visit in Sonamarg

Cross the Zoji-la Pass. Situated 3,465m above sea level, this pass serves as a popular gateway to Ladakh. While crossing this pass, one is treated to some incredible sights of the Drass Valley, dense forests and the snow-caped peaks that encircle it. Discover the magical properties of the Nilagrad River. Nilagrad River, which is a mountain river, meets the Indus River at the Baltic Colony. According to the popular belief, the red water of this river is known to possess several curative properties. 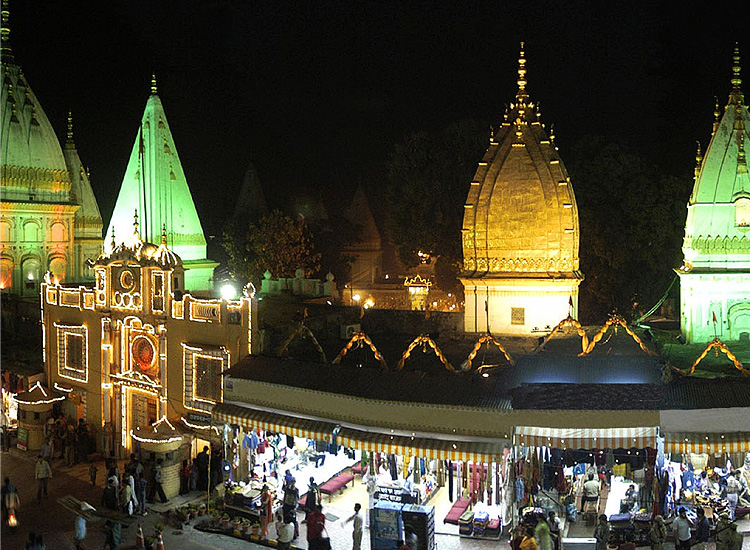 Jammu is the land where the past still lives in the present. It’s also known as J&K’s winter capital, and was once the seat of the powerful Dogra dynasty. Religion finds its strong presence here, with the state of Jammu also known as the “City of Temples”. This place has also gained an eminence for its distinctive cuisine which includes some authentic Dogra dishes like Aloo Dum, Rajma and Kashmiri Pulao.

What to Visit in Jammu

Visit Bahu Fort, which is an embodiment of architectural excellence and antiquity. Built by Raja Bahulochan over 3000 years back, the fort houses the famous Bahu Temple, dedicated to Goddess Kali. Raghunath Mandir is another religious shrine that displays magnificence on a grand scale. The inner walls of the sanctum are covered by gold sheets on all three sides. Besides, the temple also houses several galleries that dedicated to various gods and goddesses. However, the Sanskrit Library, which is a treasure trove of rare manuscripts, is a rarity in itself.

Pay a pilgrimage to the holy cave temple of Vaishno Devi.  The journey towards the temple, located in Trikuta Hills, about 13km from Katra, amalgamates trekking with spirituality. The devotees have to climb a considerable distance uphill to reach the shrine and seek the blessings of the Goddess. 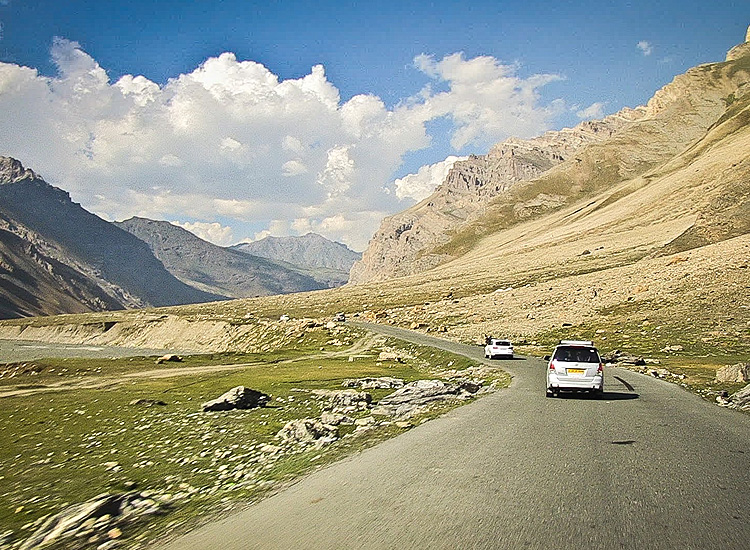 Once a Buddhist kingdom, Ladakh truly resembles a paradise. It lies crosswise to the Ladakh range and Zanskar range, besides being bounded by the mighty ranges of Himalayas and Karakoram. Jagged mountains encircle it from all sides, the gompas, or Tibetan Buddhist Monasteries, with their whitewashed stupas and prayer flags, lend a spiritual aura to the entire environment. Along with this, this place is deeply traditional and self-sufficient, as is evident from the lifestyle of its inhabitants.

What to visit in Ladakh

Any visit to Ladakh is incomplete without visiting the Pangong Lake. Resting about 140km from Leh, this lake is one of the largest brackish water lakes in Asia. It stretches to a distance of 134km and extends all the way to China. Seek blessings at the Shanti Stupa, also known as the “Pillar of Peace.” Established by a peace sect of Japanese Buddhists, the pillar contains of gilt panels which depict episodes from Buddha’s life.

Climb the world at Khardung La, also known as the Khardung Pass. With an elevation of 5359m, it’s famous for being the highest vehicle-accessible pass in the world. It provides entry into the Shyok and Nubra valleys, with the Siachen glacier lying halfway up the Nubra Valley.

If you have decided to go for Amarnath yatra! Then check out our tour packages by road / helicopter, and witness the supreme power of God – Lord Shiva!