One of the main features of India is the religious diversity, four major religions of the world originated in India. They are Hinduism, Buddhism, Jainism and Sikhism, which are classified as Eastern religions. Buddhism marked its prominence in the Indian state of Bihar and spread around a small portion of Uttar Pradesh. Most of Lord Buddha’s chief life events took place in Bihar, with the attainment of Nirvana and subsequently giving birth to Buddhism.

There are 5 important Buddhist destinations in relation to the life of Gautama Buddha. These historical and spiritual sites of importance attract the pilgrims along the former trail of Lord Buddha. Bodhgaya, Sarnath, Shravasti, Kushinagar and the Ajanta caves are a source of treasure for the devotees.

All these five Buddhist pilgrimage sites are the best places to feel the mystical charm of Buddhist religion.

Bodhgaya – The place of Buddha’s Enlightenment 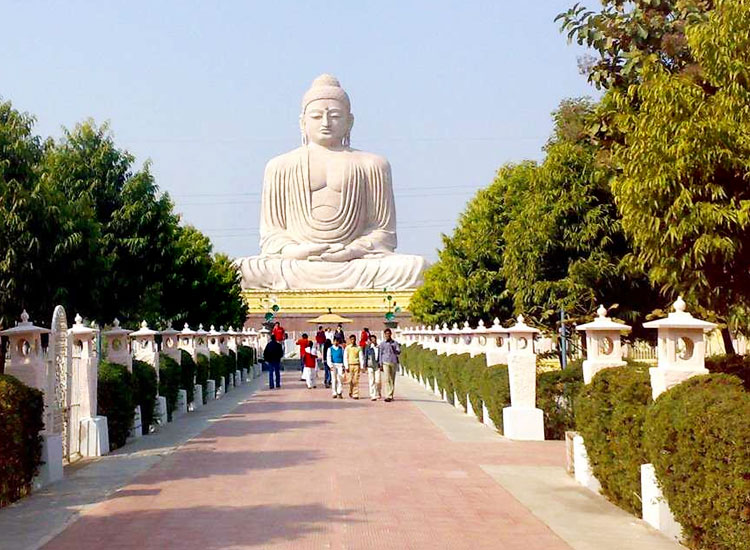 Bodhgaya is one of the most significant and sanctified Buddhist pilgrimage centers in the world. It lies in the Gaya district in the state of Bihar, India. It is believed that Gautama Buddha in this place, under a banyan tree (the Bodhi tree) attained supreme enlightenment. Important  episodes of his life took place in Bihar, like his enlightenment process and the last addressing. The religion, Buddhism, started here and developed through his preachings. Devotees come to Bodhgaya in flocks from all around the globe in order to visit the heritage temples and other valuable sites.

Some of the most visited places in Bodhgaya are The Mahabo dhi Temple, Animesh Lochan Chaitya, The Bodhi Tree, Chinese Temple and Monastery, Thai Temple, Tibetan Monastery and more. 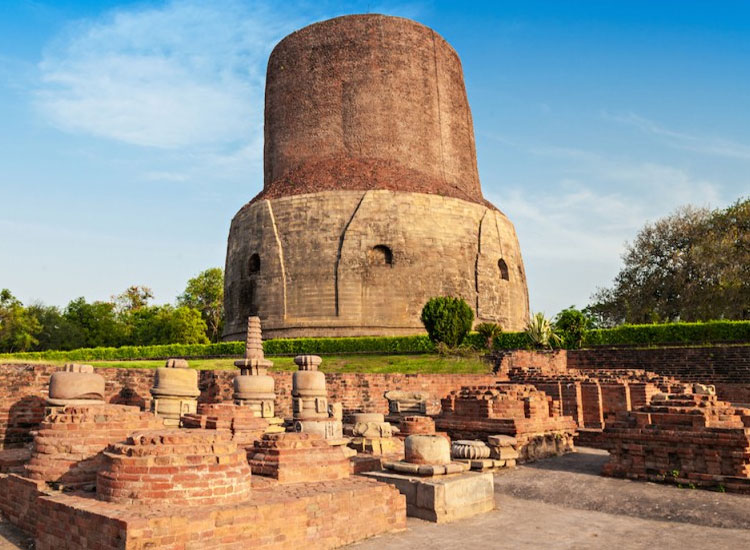 Sarnath is located 13 km from the Hindu holy city of Varanasi, in the state of Uttar Pradesh. It is after attaining enlightenment at Bodhgaya, Buddha stepped in Sarnath and here he delivered his first sermon in the deer park. His preaching was in regard to the motion of the “Wheel of the Dharma”.

It is the most visited site and is considered as Mecca for the Buddhists. There are numerous Buddhist ruins, museum, temples and other structures. However, within the deer park is the Dhamekha Stupa, erected by the Emperor Ashoka, and is famous. One can also visit the remarkable Chaukhandi Stupa, Mulaganhakuti Vihara, Ashoka Pillar, museum and more. The place is peaceful and secluded. 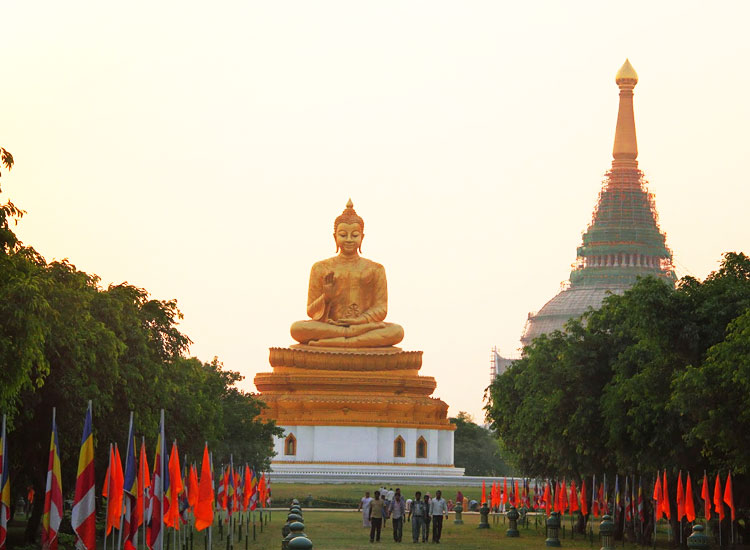 Shravasti district is one of the districts of Uttar Pradesh, located 150 km from Lucknow and was once the capital of the ancient Khosala Kingdom. It is believed that Lord Buddha delivered many of his significant sermons here and also performed some notable miracles. He spent 25 monsoons in the monastery of Jetavana, now marked by two Ahoka pillars erected by Emperor Ashoka. The place is scattered with relics and ruins of several ancient Stupas and Monasteries. The Ananda Bodhi Tree and Jetvana Monastery are frequently visited sites among the pilgrims.

Kushinagar – Place of Passing Away 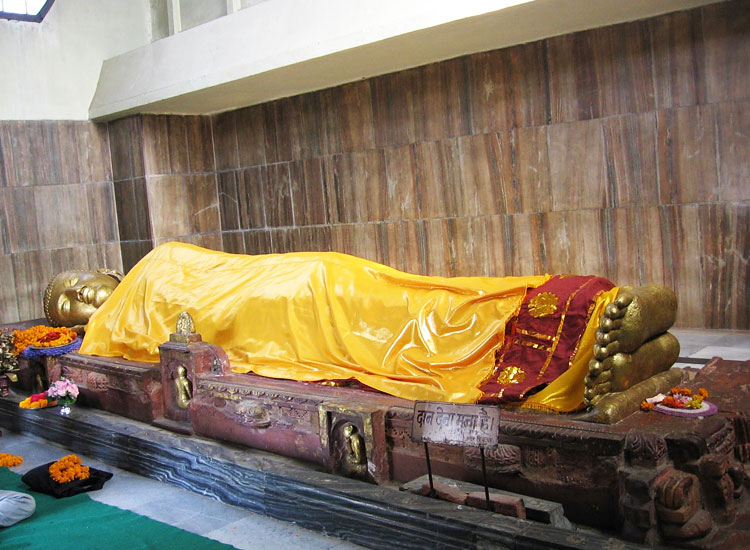 It is a small town in the Eastern part of the state of Uttar Pradesh and is another major center for the Buddhists. It is the place where Lord Buddha spent his last days, addressed his last sermon and finally passed away. He attained what is known as the Parinirvana (complete Nirvana). It is a historically rich site with Stupas and temples dating back to 3rd – 5th century. Among the several ruins of this ancient town, are the Mukutbandhan Stupa and a striking statue of the tilted back Buddha. The most famous temple is the Parinirvana Temple. 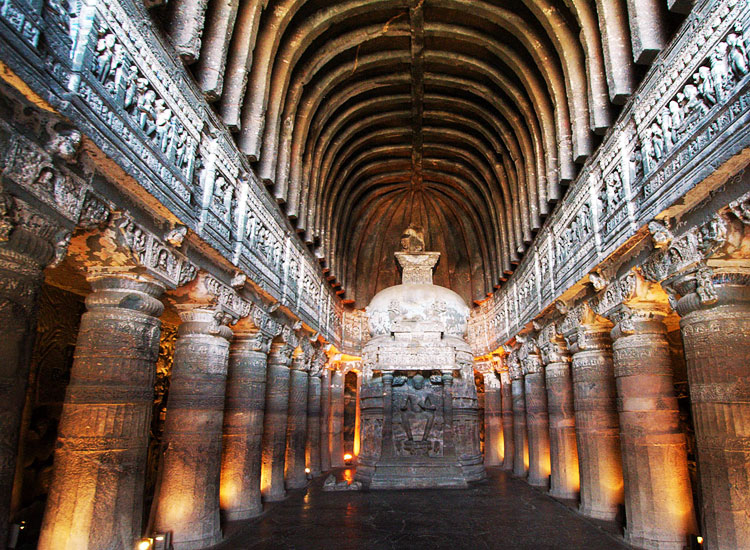 Ajanta Caves are a series 30 caves, representing the fine specimen of Buddhist religious art and Considered as the masterpiece of Buddhist sculptures and paintings.They are situated at a distance of 107 km north of Aurangabad and the name is derived from a small village of Ajanta, 12 km from the caves. It was listed under the World Heritage Site by UNESCO in 1983. The paintings on the walls and the ceiling of Ajanta reflect the shining age of Golden India.

They were discovered by the British Army officer ‘John Smith’ during a hunting expedition in 1819. The discovery became very famous and attained a very important tourist destination in the world. Some of the paintings in Ajanta are right from 2nd century and continue to the 5th century AD, they portray the deep religious influence and centers around the Buddha.