Top 15 Hindu Temples in India to Visit with Family

Here are list of Top 15 Popular Hindu Temples in India 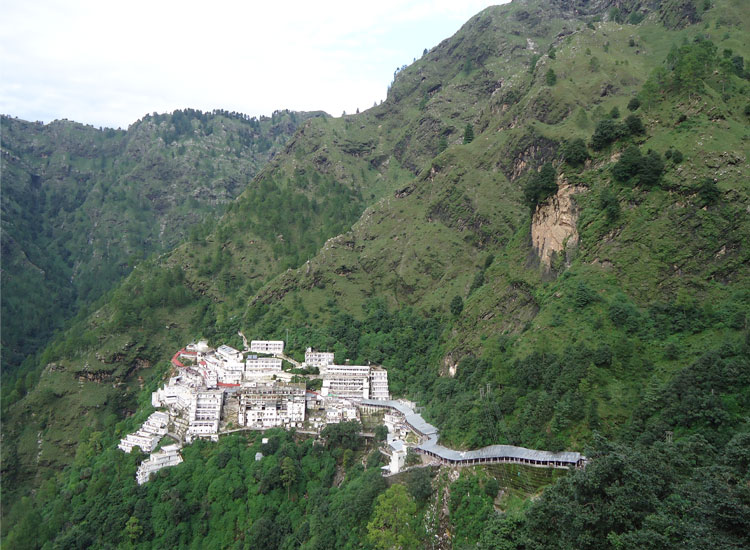 One of the most famous Hindu temple in north India, Vaishno Devi Temple is the revered abode of Maa Shakti. The trek to the Vaishno Devi temple from Katra base camp is around 5200 feet or almost 14 km from the base of Mountain but the journey to cave temple, Vaishno Devi is one of the most purifying pilgrimages. Most of the families choose walk to the temple by road but it could be difficult for anyone specially for your elderly parents! To make it ease you can book Helicopter Ride for them because it will saves lot of time and stamina which is so important to continue rest part of journey from Sanjichat to Mata Vaishno Devi bhawan. You can check availability for Helicopter tickets for your parents on our website. 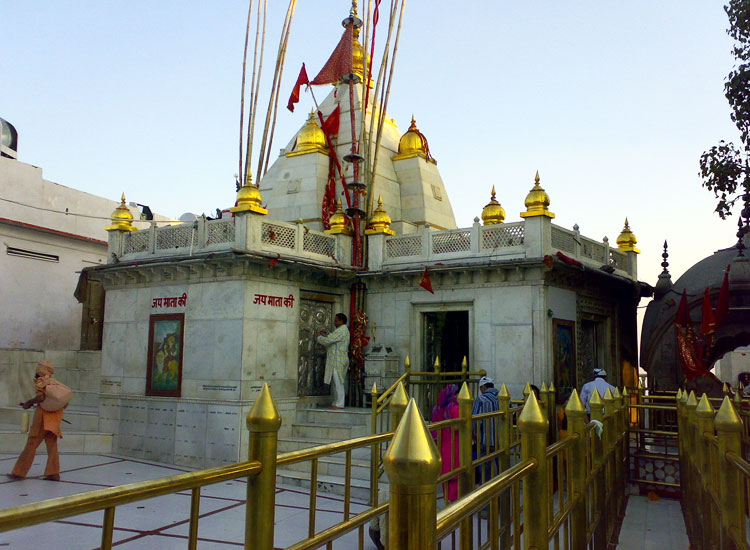 Nau Devi Yatra in north India is most popular religious Yatra specially among aged pilgrims. These Nau Devi temples is located in different cities of North India! Nau Devi Yatra is all about nine abodes of Goddess Shakti, seven of which are in Himachal Pradesh, one in Jammu and the other in Chandigarh. Actually Nau Devi tour is an opportunity to visit many temples in a single yatra which include visit to Mata Mansa Devi Temple, Chintpurni, Shakthi Peetha, Naina Devi Temple, Chamunda Devi Temple, Mata Jwala ji Temple, Brijeshwari Temple, Sheetla Devi Temple and Vaishno Devi Temple. You can plan for Nau Devi darshan tour by own or will take our service by book Nau Devi Darshan tour for family. 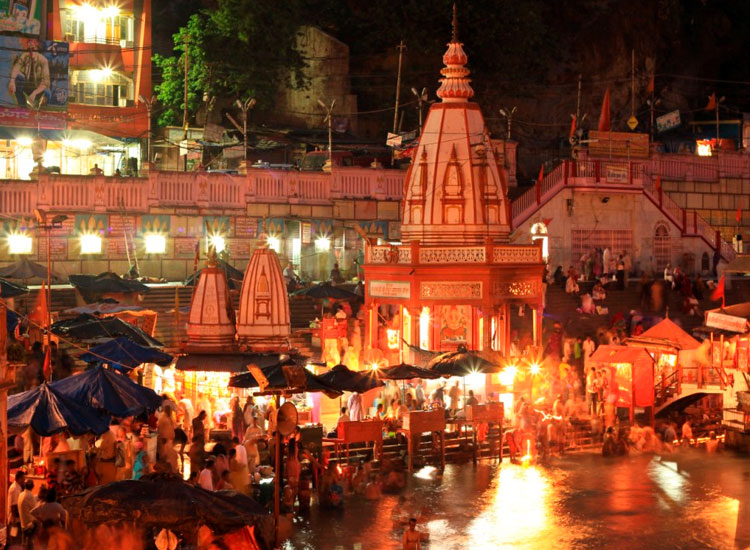 A religious city of Uttarakhand, Haridwar is located on the bank of Ganges. It is said that if you visit Har ki Paudi and take a dip in the water of river Ganges! You will open the gateways of heaven for yourself. The divine ambiance of this place is by fragrance of flowers, chants, temple bells that creates a pious environment for pilgrims. There are so many temples in Haridwar to visit and to participate in rituals! So we don’t have any reason to not suggest you for Haridwar tour with your lovely family. This tour will definitely energize you spiritually! 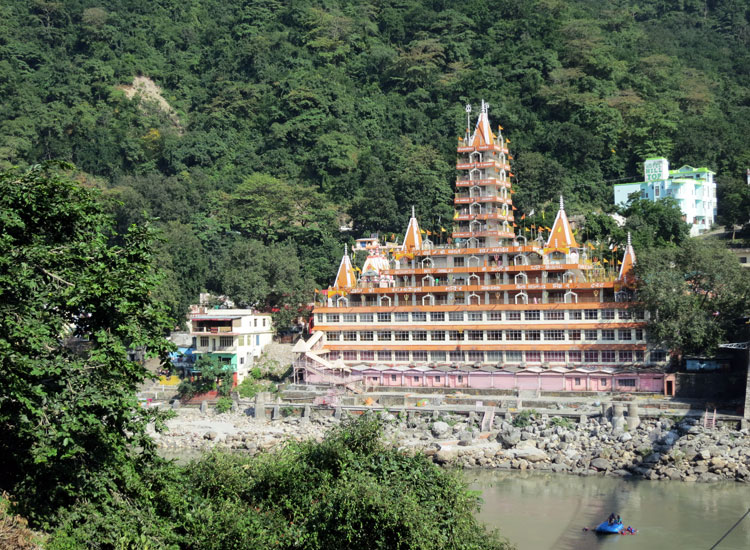 Next Destination for most of tourists after visiting Haridwar is Rishikesh. Just located around 25 kilometers from Haridwar in the foothills of Himalaya. Several yogis and sages have blessed the lands of Rishikesh with their pious presence and penance but now Rishikesh is not only famous for temples! It’s become international destination among spirituality and yoga lovers! Thousands of tourist visit this city every year. Are you? 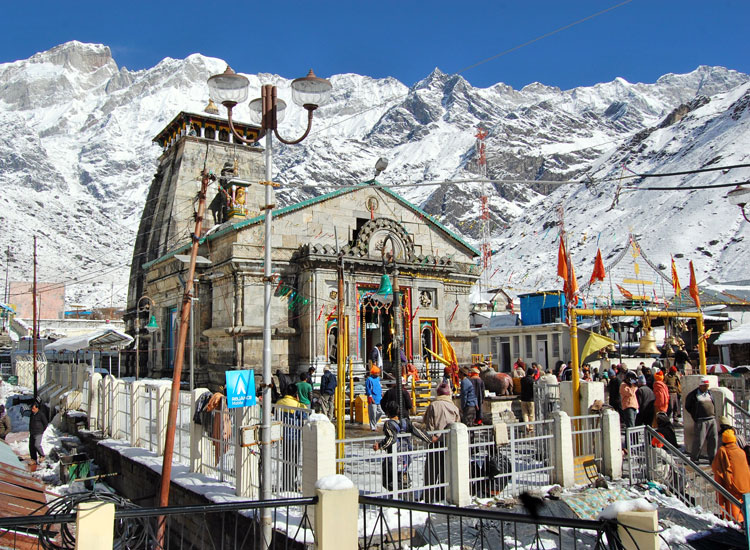 Chardham Yatra in Uttarakhand is one of the popular temple tour for religious and spiritual tour in north India. Chardham Yatra includes the Yatra to four shrines Yamunotri, Gangotri, Kedarnath and the Badrinath Dham. All these Dhams are located in the astonishing Himalayan foothills, Uttarakhand but the Yatra to Chardham is not easy as to other pilgrimage sites of North India because of high altitude and climatic conditions! But if your family members is not physically fit to undertake this Yatra! Then you need to think about other options to reach the temples. You have an option to book Helicopter package, Palki ride and horse riding etc. 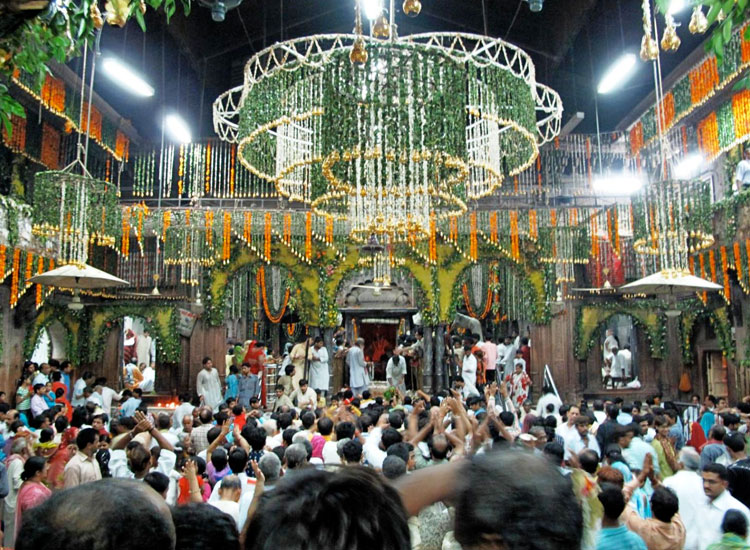 Two famous town for temple tour in Uttar Pradesh, Mathura and Vrindavan are the holy lands associated with Lord Krishna. Both these towns are the holiest Krishna pilgrimage sites. Lord Sri Krishna was born in Mathura and spent his childhood in Vrindavan. These town are blessed by the Lord’s presence. Visit these towns in Uttar Pradesh with your parents. They will be spellbound by the spiritual ambience, the devotional songs and the chants.

These town are dotted with many temples dedicated to Lord and his beloved Radha. The most famous temple in Mathura is Krishna Janmabhoomi and Banke Bihari Temple in Vrindavan. 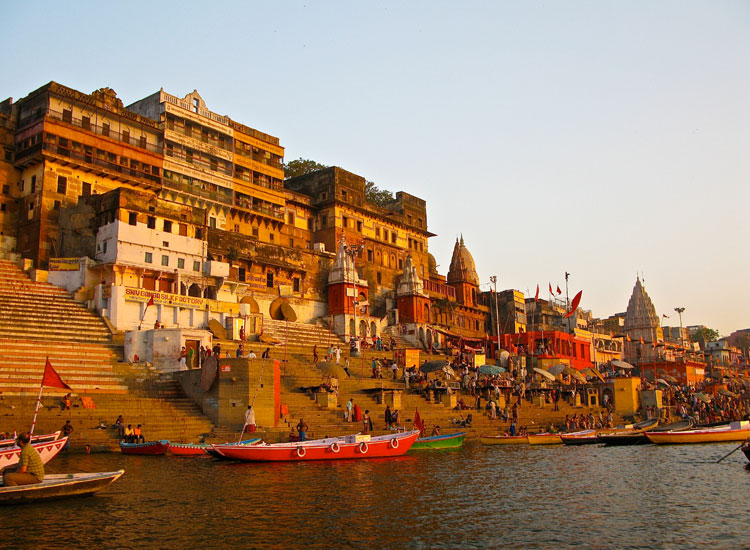 The city as old as time, Varanasi is one of the holiest cities in the world. The ‘Gateway to Salvation’ is a place one must visit with parents. Varanasi lies on the holy banks of the Ganges River in Uttar Pradesh. Elderly folks feel blessed visiting the city. The bathing ghats by the Ganges River are witness to the circle of life.

The riverside cultural capital has a number of ancient temples honoring various gods and goddesses. Shri Kashi Vishwanath Temple is a magnificent sight. Do not miss the Ganga aarti. Every evening, there is a ceremonial worship of the River Goddess. Huge brass lamps are lit. Chants, incense, flowers and a thousand floating diyas make your feel one with the divine. 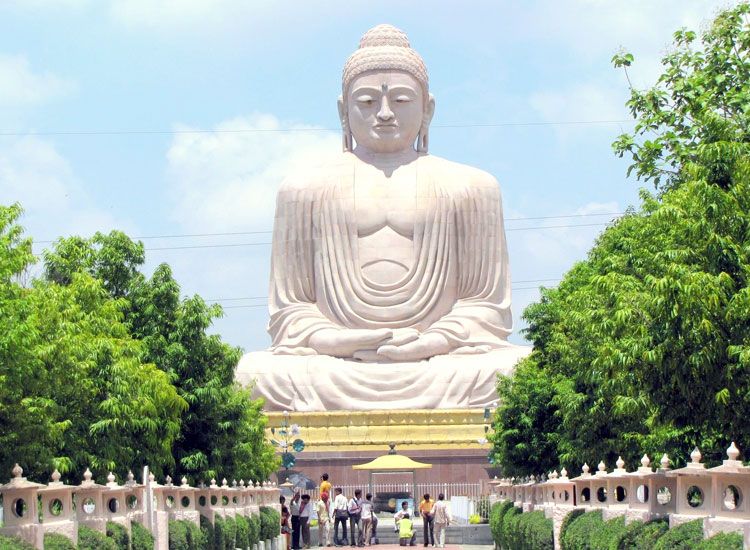 Bodhgaya in Bihar is the place where Lord Buddha is believed to have attained enlightenment. It is one of the four most sacred pilgrimage places for the Buddhists. The serene environment and with it the spiritual energy makes it one of the best places for pilgrimage tour in India with Elderly parents.

In Bodhgaya, visit the Mahabodhi temple. Visit the holy Bodhi tree under which Buddha attained enlightenment. Vajrasana is believed to be the same seat that Buddha sat on, while performing meditation. A little further, you will encounter the ruins of Nalanda University, among the ultimate centers of learning that was built on earth. Spend some days in the historical ruins and gain some spiritual wisdom. 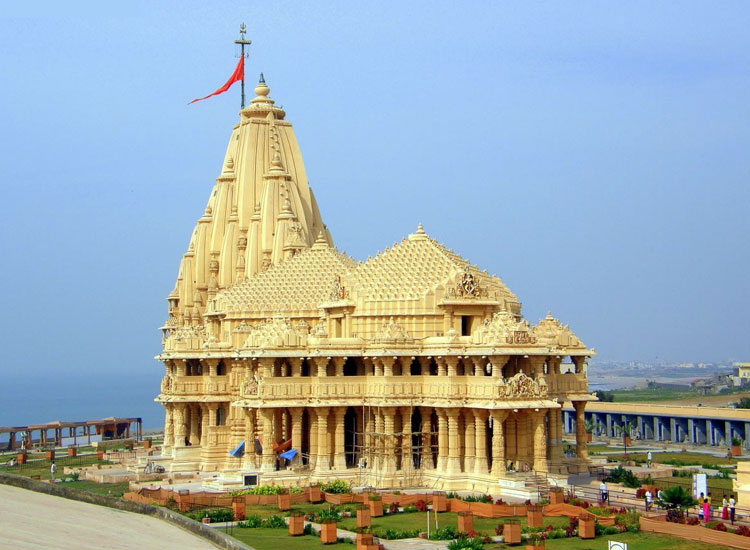 For the love of Lord Krishna, Dwarka is a holy pilgrimage site, one of the revered Chardham destinations of India. The mythical city is settled at the western tip of the Saurashtra peninsula by the banks of the Gomti River on the Arabian Sea. Dwarka is one of the four most visited and revered Krishna Pilgrimages in India.

The most magical attraction is the magnificent Dwarkadhish temple. It is situated right next to the Arabian Sea. Dwarka comes alive during Janmashtami, the birth Anniversary of Lord Krishna Festival, which falls in August or September. 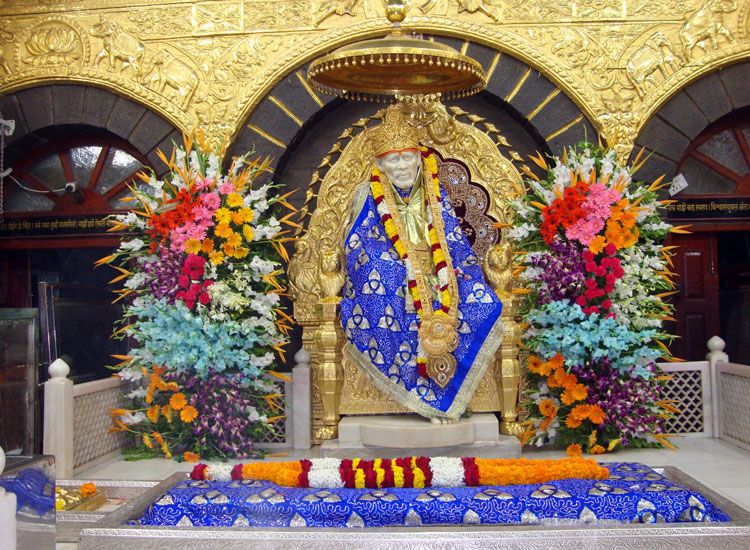 Sai Baba’s holy abode, Shirdi is one place that no family would say no to. The Fakir baba belonged to no religion and preached the humanity the lesson of the unity of all religions. Feel explainable serenity at the temple. Shirdi is close from Mumbai and one of popular religious sites for temple tour in Maharashtra. Shani Shingnapur is also another temple which is just a short distance away and is the only pilgrimage of Lord Shri Shaneshwar Devasthan.

Both the holy towns in Maharashtra offer divine blessings. The quite little towns with bustling pilgrims and spiritual ambiance is a perfect escape for you and your parents. Shani Shingnapur is the only place over the world at which doesn’t having no door for houses. You can easily visit with your entire family to the holy town.

[Go where you want to go with our packages!] 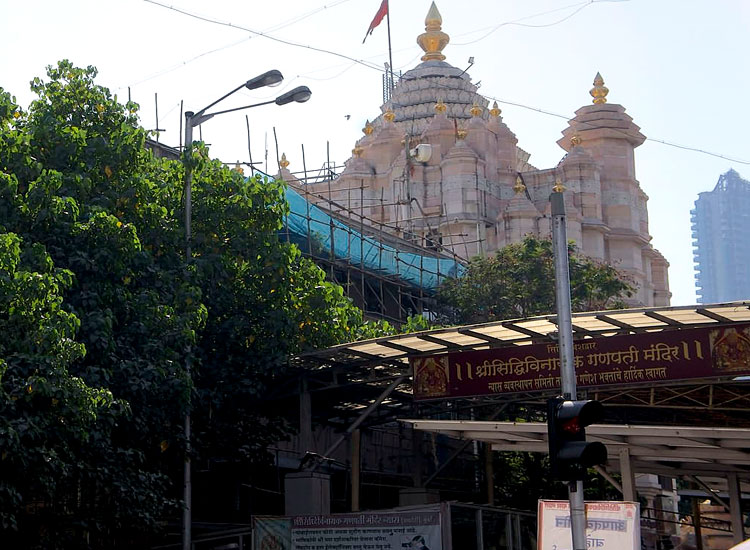 Mumbai, the ‘city of dreams’ has myriad delights. If you are visiting with parents then two spiritual sites specially deserve mention. The Siddhivinayak Temple is one of the Ashta Vinayaka Temples Pilgrimage, meaning the one who is capable of granting Siddhi (bliss). The next are the ancient caves where elders love re-living history. Elephanta Caves are located across the Mumbai Harbor on an island declared as the World Heritage Site.

The caves accessible by a ferry ride from Gateway of India. The caves are dedicated to Hindu sect, Shiva and the smaller one is dedicated to Buddhism. The rock-cut architecture has been dated to between the 5th and 8th centuries. The 20 feet high three-headed Trimurti statue carved out of a single rock is a masterpiece of Indian sculpture. 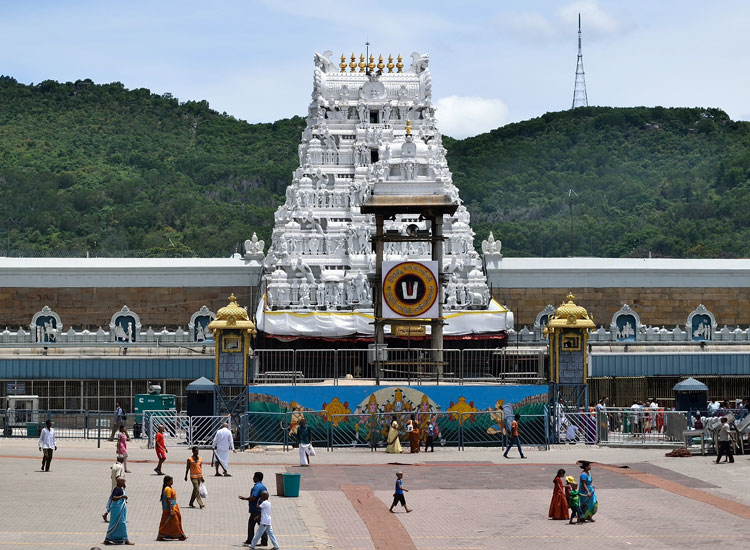 One of the most popular religious tour destination in South India, The Tirupati Temple in Tirumala is one of the top places for Hindu pilgrimage tour in India with family. The earthly abode of Lord Venkateswara (incarnation of Vishnu), the Tirupati Temple is situated on the last hill of the Seshachalam range in Tirupati, Andhra Pradesh.

The holy temple is known for its exquisite architecture. The journey to the temple is exciting. One must attend the Puja that is accompanied by many hymns and praises giving it a touch of unmatched divinity. The Laddoo Prasadam is yet another attraction of the Temple. The blissful air of Tirumala is perfect for your family to feel at their optimum well-being.

A Complete Guide to The Richest Temple of Tirupati Balaji 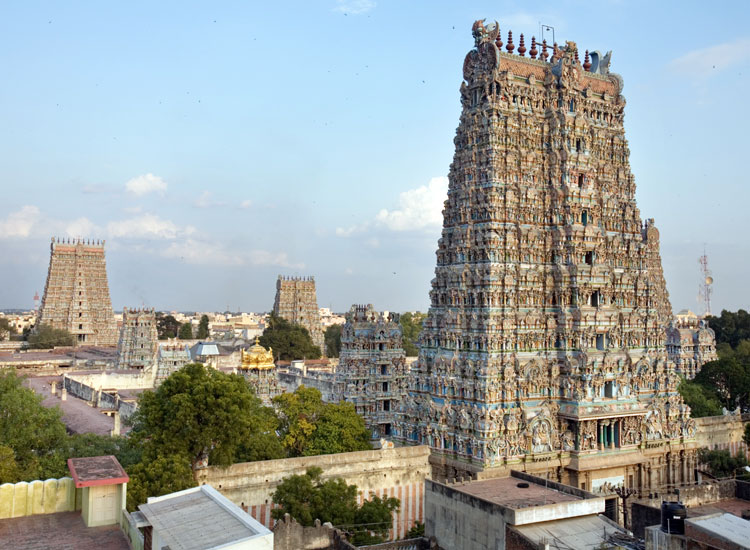 When you feel caught in the worldly affairs, the only rescue is the spiritual level. Madurai in Tamil Nadu known as the ‘Temple Town’ is a blissful pilgrimage site to visit with parents in south India. Legends have it that Lord Shiva appeared in the dream of the then King of Madurai. In the dream, drops of honey fell from the matted hair of the Lord and that is how the city got its name.

For centuries, Madurai had been an important learning center and a Hindu pilgrimage site in India. The most holy site is Meenakshi Amman Temple. One of the most famous temples in India, it has stunning architecture, an interesting legend and a divine idol. Walk through the alleys of Madurai and soak yourself in the sheer power of divinity. 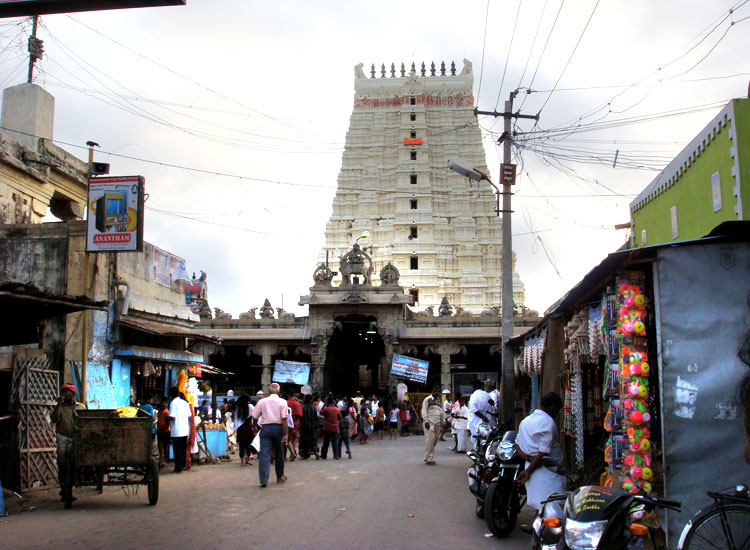 Rameshwaram in the state of Tamil Nadu is one of the sites of the pious Char Dham Yatra in India. Situated at the tip of the Indian peninsula on an island called Mannar, this sacred destination is believed to be the place where Lord Rama worshiped and repented after killing Ravana. It is one of the 12 Jyotirlingas in India.

Spirituality is set deep in Rameshwaram and the best place to experience it is at the majestic Ramanathaswamy temple. This beautiful temple is known for its incredible architecture that weaves divinity and culture together. Parents will absolutely love the beautiful beach. The journey to the island is breathtaking in itself. Revel in the unspeakable powers of divinity drenching you in bliss.

Most Famous Durga Temples in India

Most Powerful Mantras For Success
Famous Krishna Temples in India